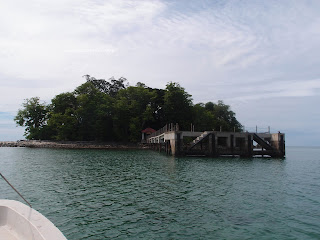 If any of you is interested in snakes, we have our very own snake island, which is situated north of Kuala Penyu, it lies amongst a group of islands with coral reefs and sandy beaches. It is part of the Pulau Tiga Park which is a fascinating spot rarely visited by tourists.

Gazetted in 1978, it covers 158 square kilometers, most of which is sea. It comprises three small islands - Pulau Tiga, Pulau Kalampunian Besar and Pulau Kalampunian Damit (snake island). The island has been dubbed 'Survivor Island’ from a television series, which was filmed here in 1996.

The park is named after the largest island, Pulau Tiga, whose name is derived from three undulating humps visible from a distance when approaching the island. The islands were designated a forest reserve in 1933 and the Park has particularly interesting flora and fauna and a rich marine life, with good diving and snorkeling over the reefs. 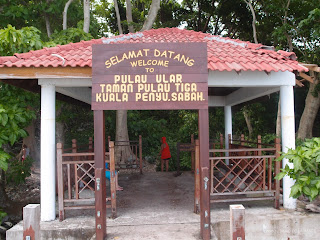 The accommodation at the park is basically self-catering units that are air- conditioned. There is no restaurant and all your food supplies have to be brought in with you. There are some private boats available for charter from Kuala Penyu.

Snake Island is a bit off the main island and you have to visit it by boat. Pisonia trees and some fig trees dominate this very small island. It is a breeding ground for amphibious sea snakes, and the island hosts thousands of Laticauda colubrine or yellow lipped crates which come up to mate and nest on the island. 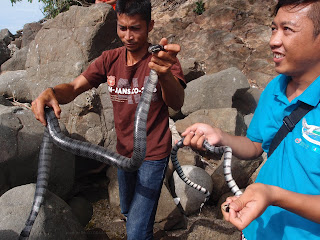 There is a very large jetty built on the island and the park allows visits with one of the rangers in attendance. Many visitors also visit this island from survivors lodge on Pulau Tiga.

The guides from the resort are used to hunting these snakes for visitors to take photos. In fact these snakes are usually found on all the islands of the wests coast. They usually rest during the day in between rocks where they take refuge from the hot sun amongst the cool rooks.

So it is always a good idea to take care if you do go exploring the islands on the west coast. However they only seem to congregate in such large numbers at Snake Island. So for an exciting excursion if you happen to be staying on Pulau Tiga, this is a very interesting tour to do.