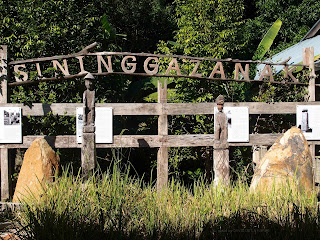 A tradition of erecting a Sininggazanak was popular with the Kadazans of old and these monuments were mainly found around the Penampang – Putatan and Kinarut areas near Kota Kinabalu. Sininggazanaks are now very difficult to find these days. A Sininggazanak statue is carved by a relative blood of a Kadazan man or woman who has died without heirs. This is to commemorate the dead person as well as to stake a claim on his or her land. According to Kadazan tradition, land should be passed on to a person’s child, and if that person is childless, then it should be passed on to a relative blood. That is to say, a man’s land should be inherited by his brothers or sisters and not by his wife or wife’s family. Likewise, a dead woman’s husband does not inherit her land. A Sininggazanak in the middle of a paddy field signifies that the field still belongs in name to the dead person. It is also believed that the spirits inhabit the statue and is the guardian of the paddy field. 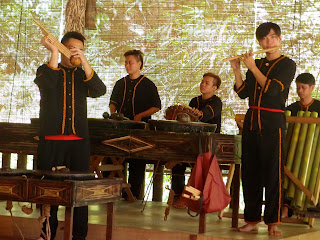 Erecting a Sininggazanak statue was no mean feat. First a carving in the image of departed person would have to be carved out of a log of hard wood. This was usually taken from the Tembusu (Fagraea fragrans) tree. This tree is a good timber tree and the heartwood is strong and durable lasting up to a hundred years. Once this is done, a very specific ritual has to be performed by Kadazan priestesses “bobohizans” when erecting the statue in the particular rice field. Prayers and the ritual sacrifices of some animals (Chicken or Pigs) are usually made. The Bobohizans would then invoke a benevolent spirit or two to take up residence in the Sininggazanak, who are to look after the deceased rice field. This complicated ceremony has now mainly been forgotten as many of the Kadazans follow different religions today. 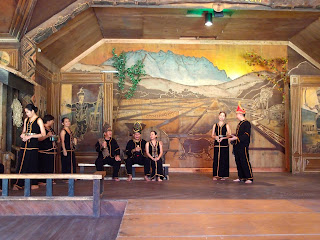 The most famous one is at Kampung Tampasak in Kinarut. To preserve this heritage, the Sabah Museum authorities negotiated the purchase of the statue for the sum of one water buffalo, one pig, one chicken and some cash. A vital part of the agreement was for the authorities to carve a stone replica of the Sininggazanak and replace it at its original location. The original used to be displayed in Sabah State Museum, but is now kept in the storehouse instead. A replica of what the statue looks like can be seen on the pillars of the arch at the entrance to the museum. It is actually just a wooden statue.

Recently, the proprietor of J Borneo Native Village has formed a group of talented young Kadazan
actors, singers and musicians to create the very first Kadazan musical about this ritual. It is conducted entirely in the Kadazan language and runs for about 45 minutes. The show is divided into five scenes with two performances being held daily from Monday to Friday. For anyone who is interested to learn more about the Kadazan culture, this is a show not to be missed. Contact the organization on Facebook.com/J Borneo Native village or call 019 8621211 for more information.

I'm Dennelton from Sabah, editor of www.tvokm.com. I am a blogger since 2008, i have a great interest about blogging and seeking additional income through the internet. Follow me with like our official Facebook Page HERE
Labels: local, local-foreign history, travel