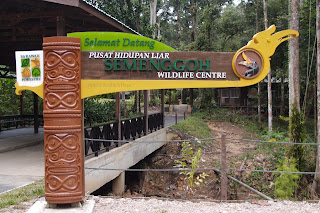 Just like in Sabah , Sarawak also has its own rehabilitation centre for Orang Utans at Semenggoh too. The Semenggoh Wildlife Centre was established in 1975 to care for wild animals which have either been found injured in the forest, orphaned, or were previously kept as illegal pets. Located on the boundaries of the Semenggoh Nature Reserve, it is only 24 km from Kuching city and was established with three main aims.
To date the center has been successful in caring for over 1,000 endangered mammals, birds and reptiles from dozens of different species. However, the big draw to the center for visitors is the Orang Utan rehabilitation programme. It has become a very important tourist attraction and put the centre on the world map. As many Orang Utan have been successfully reintroduced into the surrounding forest reserve, the forest’s carrying capacity here has been reached, and rehabilitation activities have been transferred to the Matang Wildlife Centre, part of the Kubah National Park.

Due to the success story of the center, Semenggoh is nowadays a centre for the study of Orang Utan biology and behaviour. It also provides a safe and natural haven for dozens of semi-wild Orang Utans who are graduates of the rehabilitation programme. Many of the rehabilitated female Orang Utans have bred in the forest reserve and often hang around the center as its an easy source of additional food for their young ones.

Visiting Semenggoh is a beautiful and educational experience - a chance to see semi-wild Orang Utans ranging from tiny infants and boisterous adolescents to dignified mature adults, in a secure natural habitat. The best time to visit Semenggoh is during the morning and afternoon feeding sessions when there is a good chance of seeing semi-wild Orang Utans returning to the Centre for a free meal. Animals have a very keen sense for time and it is no different with the Orang Utans. As feeding time approaches, the semi-wild orang utans emerge from the rainforest, descending from the forest canopy to the lower branches of trees near the feeding platform. Often visitors will be entertained with the antics of young Orang Utans in play or even mother teaching her baby how to climb trees and vines. Surprisingly these are not natural instincts and have to be thought, either my their mothers or by human caretakers if the baby Orang Utans are orphaned . In the wild a baby Orang Utan will usually stay with its mother for about 7 years to learn survival skills. Funnily enough, all games come to a stop as soon as they catch sight of the ranger carrying buckets of fruits and bottles of milk. Then, the Orang Utans slowly make their way to the feeding area, faithfully following the footsteps of the warden or swinging in the trees above the footpath. Occasionally an Orang Utan will visit the Centre HQ rather than the feeding area, to simply look at the visitors rather than feed. Whilst it is impossible to assume human motives for this behaviour, it appears they are simply satisfying their curiosity, or in some cases showing off their delightful infants to an admiring audience.


Feeding times: 9.00-10.00am and between 3.00-3.30 pm.
Entrance fees: International RM10.00, MY card RM5.00
Getting there: Many of the hotels have a shuttle service to the centre or you could purchase a tour with a local travel agency. Taxis are also available, but you will have to pay for the waiting time as there are no taxies on standby there.