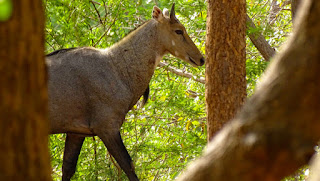 The Nilghai is an antelope, and is one of the most commonly seen wild animals of central and
northern India and eastern Pakistan; it is also present in parts of southern Nepal. The mature males appear ox-like and are also known as Blue bulls. The nilghai is the biggest Asian antelope.

Female nilghai have a short yellow-brown coat. Males' coats gradually darken to a grey-blue as they reach maturity, They have white spots on the cheeks and white coloring on the edges of the lips. They also have a white throat bib and a narrow white stripe along the underside of the body that widens at the rear.

Nilghai can be found in single sex or mixed sex herds of 4-20, although old bulls are sometimes solitary. They are diurnal and live in grasslands and woodlands where they eat grasses, leaves, buds, and fruit.

The main threat to this species is the loss of habitat due to human population growth. The species is declared by the IUCN as being at low risk of extinction.
Share this article :