skip to main | skip to sidebar
Home » idea , idea-story » You can show him that you are interested

Q: I have known him for three months. The first time we met in a cafe, I felt that he might be the one
for me.

We can chat for hours. Sometimes we go out. Even though I feel happy with him, I dare not tell him how I feel about him. I can’t be sure whether he feels the same way about me.

He got drunk recently and called to ask me to be his girlfriend. I was happy about that but I dared not say ‘yes’ because I was afraid he would forget what he had said the following day. 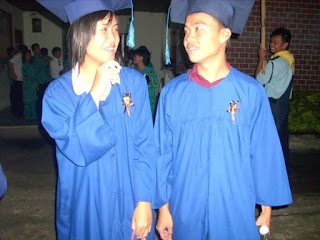 When I sent him a message later he did not reply. The next day he messaged to apologize for what he said that night.

Although I was disappointed, I told him I have forgotten what he said.

Should I tell him how I exactly feel or just wait for him to make the first move?

A: Three months does not qualify for love in the chat-room. You hardly know the guy.

The golden rule is that before you confess your love for him, you should really know him better.

But all is not lost. You can show him that you are interested by continuing with the calls and messages. Also meet up whenever you can.

Get to know about his family, meet his friends and check him out.

The point is for you not to be too trusting until you are sure that he is not one of those who prey on sweet girls.

If he is genuine, it would appear that he fears rejection. He may have been drunk when he asked you to be his girlfriend and your initial lack of response may have sobered him up.

But since he called and apologized, it shows that he is keen on you.

I suggest you do not worry about his behaviour.

He may be a bit shy now. He will warm up in no time, when you can flash him warm smiles and show him that you like him too.

The important thing is you must take your time. Do not hurry into a relationship. Test love a bit before you are sure that he is meant for your future.