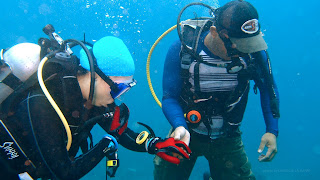 Very frankly, we are spoilt for choice when it comes to diving in Sabah, as some of the best diving sites in Asia and the world are right at our doorstep. From the World-renowned Sipadan Island to Layang Layang and all the others in-between, we have something for everybody including the most jaded diver.

Many people forget that we have very good diving right here in the City as well. Just a 15 Minute boat ride gets you to 5 beautiful islands that together with the surrounding sea and reefs make up the Tunku Abdul Rahman Marine Park. It has 13 dive sites with lots to offer but has always been overshadowed by Sipadan.

The visibility here can be good with distances of up to 20m, or drop to less than 5m depending on the weather. Best time would be the drier months between February to August however it is possible to dive here all year round. Water temperatures are an almost constant 30c but occasional we do get some thermal climes and it goes down to about 26c.

During the Krill season (February to April) the Whale sharks come a calling and are often spotted within the islands in the marine park. You will also see various rays such as Marbled and the Blue spotted rays (the most common) and I have watched schools of barracudas grow from juvenile to adulthood before they disappear into the blue yonder. Yellow fin & dogtooth tuna, Trevally and Spanish mackerels are also commonly spotted and very often you will come across green and hawksbill turtles while diving. If you are into Micro stuff, you will not be disappointed.

Look out for Frogfish, Scorpion fish, and various species of Lionfish, filefish and the elusive comet fish. Trumpet fish, Mantis crabs, lobsters, octopus and squids, beautiful Mandarin fish and in season, every clump of bubble coral seems to be home to the hairy Orang Utan crab.

Banded pipe fish can be spotted on almost every dive together with schools of fusiliers, while Bat fish, Angle fish, stone fish, moray eels and little humbugs play amongst the coral gardens. Actually the list could go on and on and divers keep finding new stuff almost every day. Some have seen the mimic octopus and the last we heard, someone claimed to have seen the pigmy sea horse. (Yet to be confirmed).

I have seen a number of seahorses around the park and it’s pretty good for night dives as well. The Coral cat shark is commonly seen at night.

Dive courses: If you have never dived before but would like to try it, book yourself on a Discover Scuba dive, you will be given instructions on how to use the equipment and taken on a personalised dive with your dive master. If you’re planning to take up the license as an open water diver or other courses, this is a great place to do your dive courses, as it’s so accessible from the city and with our sandy beaches it the perfect location to learn.