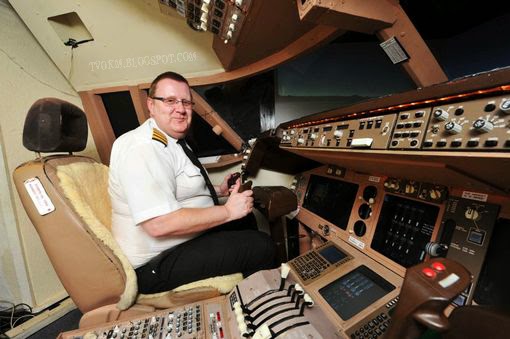 A man, who had to forget about his ambitions to become a pilot, has built a real aircraft cockpit Boeing 747-400 in the two-bedroom space in his home.

The cockpit built by Davis is also equipped with a working simulator.

More amazingly, the cockpit is not only built as a display, but also open for aircraft enthusiasts to run; people that are nervous to board as well as professional pilots to conduct trainings.

Davis said he had to forget about the aim to become a pilot because he does not have sufficient knowldege in Mathematics.

"I really want to become a pilot, but now I have something that great."

The Simulator is similar to the real aircraft and has attracted many commercial pilot to come to his home to try it. Davis can also socialize with professional pilots and they are very impressed with his simulator.