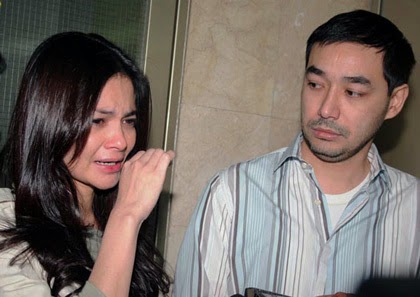 Famous Indonesian female artist, Cut Tari, staggered the entertainment industry by being involved in a sex tape scandal with vocalist Noah Ariel. Her husband is divorcing her.

Yusuf is reportedly dropping the divorce on Cut Tari on December 18 and the couple's divorce case will be heard in court on January 22.

Cut Tari and Yusuf, respectively, said when interviewed by reporters, that the cause of the cracking of their household is because there was no understanding.

If it is in the name of marriage, of course, then the understanding between the couple is very important. He has intended to divorce her for a long time, but is just waiting for the right moment. Yusuf said that "After dropping the divorce, I am out of the house." to the reporters.

To Cut Tari, the consent for divorce by Yusuf was achieved in harmony. We both agreed on this direction (divorced).

News of the separation between Cut Tari, or her real name Cut Tari Aminah Anasya, 36, with her ​​husband, Ricco Tirtaputra Gani or Johannes Yusuf Subrata, 41, received widespread attention from the media with various speculations conveyed.

Most media report that their household relationship began to crack after the spread of the sex scandal between the famous female artist and Ariel, real name Nazriel Irham, in 2010.

However, when the case gets hotly disputed, Joseph is always there to give support to his wife even though dealing with the police and the court.

At the same time, Cut Tari also allegedly had an intimate relationship with another man. However, Yusuf denied the divorce due to the presence of a third person as reported by the media in Indonesia. The couple got married almost 10 years ago and have a son named Sidney Azkasyah Yusuf.
Share this article :