skip to main | skip to sidebar
Home » journey , journey-travel » My Journey Back To Sabah

My Journey Back To Sabah 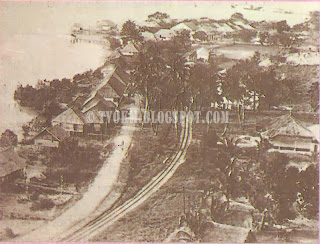 The evergreen trees glistened with freshly fallen snow that wintry Christmas Day. We (my family) had already opened our Christmas gifts the night before, so we wouldn’t be late the next morning. We were being sent to the Southbend Airport in Indiana by our Sabahan friends. This was the first part of our trip back to our own homeland.

When we got there, us kids played some Pac-Man in the arcade while our parents talked. Then, we said our last goodbyes and climbed aboard the sleek, air conditioned Greyhound bus that would take us straight to the giant O’hare Airport  in Chicago, approximately 80 miles away.

The plane soared off the runway right into some fluffy, puffy white clouds. We were on a non-stop flight to Tokyo in a Northwest Airliner. The trip was a bit uncomfortable at first, because we were sorta ‘chasing the sun’, but after I pulled down the window shades, it was quite alright. We got  to watch movies and also we could get as many softdrinks and snacks as we wanted (it was free!). But after we flew over the snow-covered Rocky mountains, I fell asleep.

I was awaken when we touched down at Tokyo International Aiport. We were there only for 6 hours, before boarding the plane again, only time we were off to Manila.

We were in Manila for one day, and one night, and we made use of that day, going shopping. It it’s a very colourful city. The hotel we stayed in was very comfortable with TV, and swimming pool, complete. We were sorry to be leaving in so soon, but as luck would have it, we got to stay there another night, this time expenses paid! Actually, we were already on board the MAS airplane, but halfway there we turned back because the pilot got words that there was a plane stuck on the runway in Kota Kinabalu airport. This time it was a lot more fun because we got free food too.

When the airplane finally coasted down in KK, I was a bit sorry, because the trip was, and had been a lot of fun. I hope I’ll get another to have one like it in the future.
Share this article :