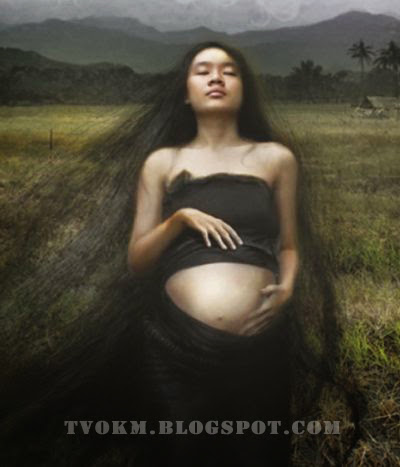 At first, there was nothing but Kinoingan and Sumundu. Together, they created man and the universe, the earth, and all things visible and invisible, know and unknown.

All was well in paradise, and the world was pure and beautiful, but one day, Ponompulan, Kinoingan's son, rebelled against his divine father, and perverted the hearts and the human mind on earth.

Frustrated and annoyed, Kinoingan banished Ponompulan from heaven and throw to Kolungkud. Then, to punish people for their sinful ways, Kinoingan sent seven plagues. The plan for the last outbreak was severe, and hunger threatened to destroy every living creature on earth.

Finally, the people realized their sins on earth, and turned back to Kinoingan, to ask for forgiveness. Ponompulan, Kinoingan's only daughter, begged for mercy from his father to forgive the people of the world and agree to Kinoingan's proposal that she be sacrificed, as a symbol of the greatest love of all.

Kinoingan sacrificed one of his daughters so that people can have food. Seedlings planted as part of his body and become a source of the world's food: rice. Ponompulan spirit dwells in rice, and it was seven in the Bambaazon (Bambarayon), rice spirit. Brown rice is the most sacred of all because it is from Ponompulan flesh. Ponompulan, often called Huminodun, is spirit of the rice. During harvest time, the Bobohizans (Bobolians) ushered in seven spirits Bambaazon to stay in Tangkob (Tuguruon), at home, until the next planting season.

Bambaazon created in each part of the rice and their related products. During the summer, it can be avoided by breaking rice, whether natural, accidental, plain or through violence and neglect. Also, during the harvest itself, part of a spiritual component Bambaazon is separated. Therefore, it is very important that after the Bambaazon harvest, the mystical spirit should spread and be collected by the spiritual specialist, to be brought home, put back together, healed and defused.

The Bobohizans do Magavau, and Humabot Modsuut ceremony, journey through the spiritual world to save Bambaazon from broken and lost. Intact, Bambaazon will ensure that the next harvest is equally abundant.

As a sign for gratitude, the gift of Bambaazon Kinoingan to the good harvest, the Feast Ka'amatan or Ka'amatan Festival (Harvest Festival) is held. Kadazans tribe will forgive each other, restoring and strengthen their peace and harmony, but not only in the real world, but also between the spiritual world and play gongs, singing songs and ancient dance.

To commemorate the greatest love of all, the sacrifice of sole Kinoingan daughter, the Kadazans idolized Huminodun as Unduk Ngadau (lit: solar zenith, Harvest Beauty Queen) to remember that Ponompulan is perfect: she is the beauty of the whole heart, mind, soul and body.
Share this article :