The Origin Of Dusun Tribe In Sabah 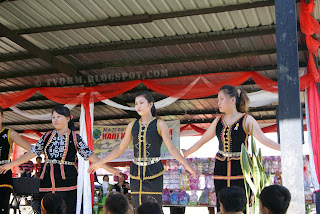 According to academic sources, there are five theories about the origin of Dusun in Sabah. First, Dusun people believe their ancestors comes from the Indo-Malayan tribes from Southern China to countries in Southeast Asia (TR Williams, 1965). In their study, social scientists and historians consider the physical aspects, oral language, blood group and the art of the Kadazan-Dusun people. The second theory, the origin associated with the migration of the Mongols, Chinese or Kachin and Annam from Myanmar (Ivor HN Evans, 1923; TR Williams, 1965). Third Theory, Kadazan-Dusun is a hybrid of the Chinese (Ivor HN Evans, 1923; Owen Rutter, 19 220). Fourth theory, the Kadazan-Dusun are the descendants of ancient Madai Caves. The fifth theory, saying the race is originally from Bunun tribe in Taiwan.

According to the oral history of the population, the Dusun communities are descendants of gods and his wife Siminundu are Kinorohingan. However, the Dusun traditional community only supports the truth of this myth. As a result of the spread of Christian's religion and Islam, the current generation of young people now is more of logical and set aside the traditional myths about their origins, which are considered metaphysics.

Since the advent of colonialism in 1865, followed by the spread of monotheism among the Dusun community, their lifestyle had begun to change. However, there are precious relics that are still intact and have withstood the ravages of time. The relics refer to the heritage of the traditional way of life, customs, beliefs, culture including the arts. Art is one of the elements of heritage and has been preserved to this day due to its pervasive influence in everday life. The practices are simple to follow and have been adopted in their everyday lives and they do not conflict with the religious practices.

The largest ethnic group is the Dusun tribe which constitutes one-third of the population. They live in the west coast in places such as Penampang, Papar, Tuaran, Kiulu, Tamparuli, Tenghilan, and Kota Belud. In remote places such as Ranau, Tambunan and Keningau, they are traditional farmers who cultivate lowland paddy and hill paddy. Some also are involved in hunting and fishing. Usually, people from the sub-ethnic groups mentioned above from areas such as Kimaragang in Kota Marudu, Lotud in the Kota Belud, Orang Sungai in Kinabatangan, Sugut, Paitan and Pitas. Most of the Kadazan-Dusun people embrace Christianity. The ‘orang sungai’ or river people who live in Pitas converted to Islam. In Kinabatangan, some of the river people also converted to Christianity.

The Lotud community inhabit Tuaran, Tamparuli, Telipok and little in Kota Belud (Tampasuk). Which are in the west coast. They used to live collectively in longhouses in communities of 150-200 people. However, they hardly live in longhouses nowadays as their dwellings have given way to development.

One form of art that is very popular among the Dusun community as well as the other indigeneous communities in Sabah is the art of traditional singing. Songs are sung in their native languages or dialects but there are also songs which combine a few dialects.

whatever u guys said, maybe it was already continously modified from the our nenek moyang long ago... we dont know the truth... if anybody knows the link of this kind of research, that it recognized and acceptable. so, plz share the link or recommend any sources so that we can learn about our dusun... i would like to know also.

my fren used to told me before, we got the 'dusun' tittle because of the penjajah long time ago. they stated us dusun because we do farming to live... i dont know but she said so.:-).. if yes, where is the source?

another one, we were mongolian too. if yes, where is the source?

we need the right person to help and sourcing us..hehe...tq